Home > Blog > Equipment > What you Need to Know About Excavators for Small Projects
May 17, 2017 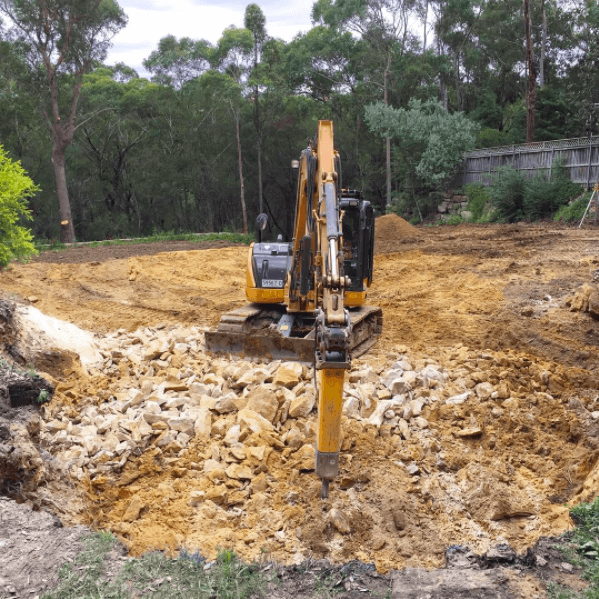 We all know what an excavator looks like – they’re the big, heavy machines that pull dirt out of the ground in large quantities using a movable boom, arm and bucket. But whether you’re working on a large-scale construction project or creating a garden pond, you may need an excavator to dig up the land, soil, rocks, and debris.

What people often don’t realise is that excavators are much more versatile than they first appear, coming in different shapes and sizes depending on your requirements. Hydraulic excavators – the most common type – are used for a far wider range of applications than big construction sites, and indeed they’re often used in quite surprising ways.

Excavators can be used for DIY projects at home

From digging out trenches for some landscaping work, or clearing an area for a pool, an excavator can be a huge help in getting the project done in a reasonable time frame. It’s possible to hire excavators of a small “personal” size, which are designed to be able to fit into and operate in the kind of cramped environments that are common with domestic use.

These small excavators are formally called “compact excavators,” and their great strength is that, even though they have a small form factor, they’re still powerful machines, capable of digging through the toughest of dirt, and carrying large loads of it to a truck or trailer for later removal.

They’re also good at getting into any situation and environment, and that’s because manufacturers tend to build a range of models that will cover everything. For example, excavators typically come in two different varieties; one with tracks, and one with wheels. For projects that take place on relatively flat ground, concrete, or indoor activities, then the wheeled excavator is generally the way to go, as it has the kind of mobility and speed that will make the project a snap.

For more difficult environments, including those on hills, wheels are not appropriate, as they lack the grip and stability. In these circumstances, the tracked version is preferable, as it can be operated while on fairly steep inclines.

The short answer is: more often than you think!

There are a number of situations and projects where using a compact excavator can produce the best results in a short timeframe, helping you get to more important tasks and stick to your construction schedule. Smaller excavators are fitting for tasks where a shovel just won’t get the job done right, and can help minimise the risk of hand injuries as they make the job easier and safer.

Excavators are typically used for any of the following projects:

As you can see – it’s not just the ability to dig that has people looking to hire an excavator; it’s also the strength of the machine. For things that are too bulky and awkward to move (or remove) by hand, the ability for an excavator to shift it around in a snap is highly compelling.

This also means that these devices not only help with the speed of a project, but they make it safer, too, saving workers many hours of back-breaking work.

What to know before you start to use an excavator

The first thing you should do if you’re planning on using an excavator is get formal training in its use. Like with other high-powered pieces of equipment, such as chainsaws, excavators can be very dangerous when not used properly. If the job is a one-off, then you might consider hiring someone to operate the excavator for the day, but if you intend on doing a number of projects using the machine, then doing a short course on the operation of these machines might be a wise investment.

There are a number of excavator training courses available across Australia that will provide formal certification to operate these machines. These courses generally only take 1-3 days to complete, and will cost you around $1500. You can also complete Verification of Competency (VOC) training that can be achieved through any Workplace Training Centre.

Once you hire an excavator, take the time to properly read through the operator’s manual that will come with it. There are a large number of manufacturers of these machines, and each machine will have its own unique quirks that you should familiarise yourself with first. It’s also a good idea to turn the machine on and drive it around a flat, concreted area the first time, just to get a feel for how it operates before putting it to work.

Having some basic excavator skills, and the confidence to hire and use one by yourself is a good idea, because as you can see, these machines are multi-functional and useful for anyone that plans on getting significant work done on their property. Sure, you can spend a great deal of money in hiring professional operators each time you want to dig a hole in your garden, but because these machines are so versatile, the investment in the training makes much more sense as a long term, cost-saving skill.