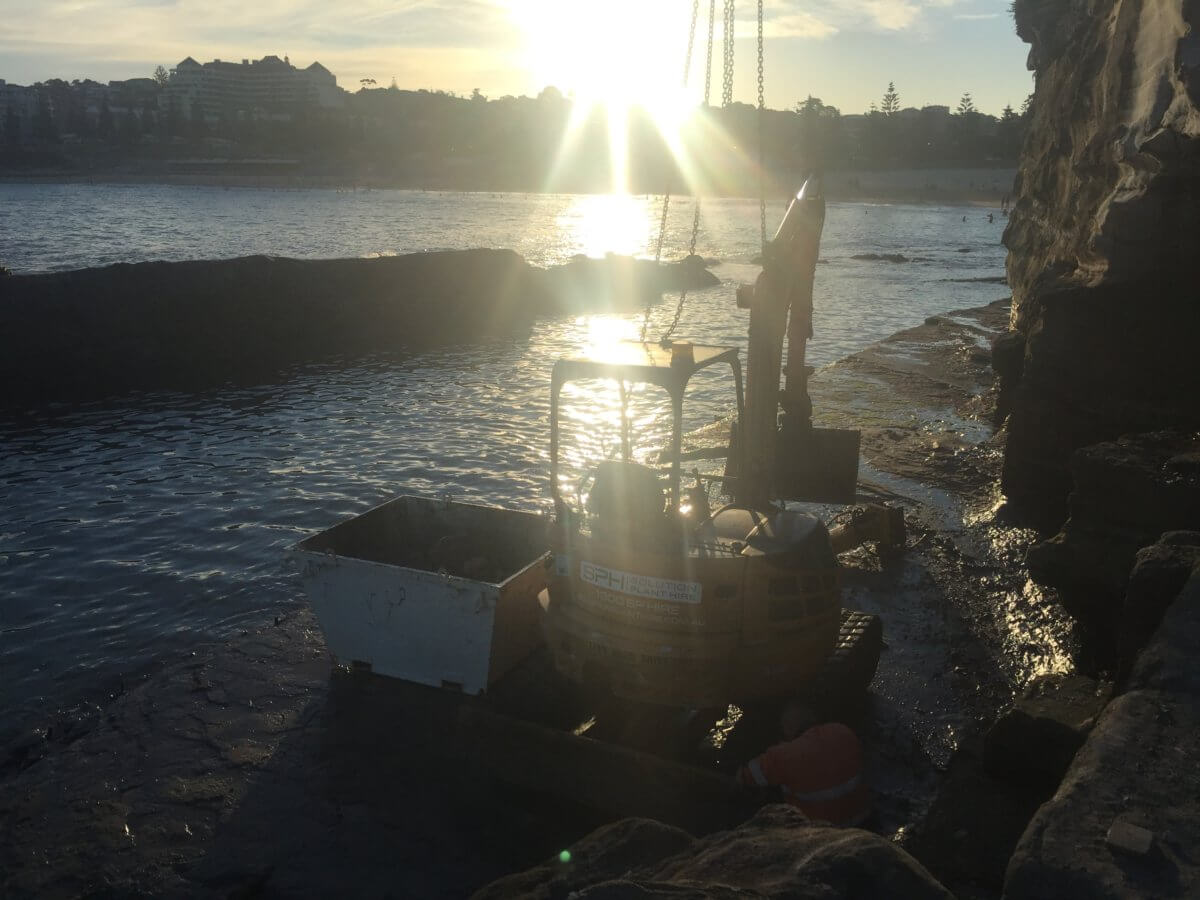 At Solution Plant Hire we can shift boulders.

Sydney saw its fair share of wild weather throughout 2016, the storm which hit Coogee in June was no exception, during which a 30-tonne boulder made its way into the popular Coogee Baths. Over the months afterward Randwick Council explored a number of ways to remove the giant boulder.

Being 30T it wasn’t going to be an easy feat removing such an enormous boulder. The council was trying to take all factors into consideration including the environment and noise levels. There was also the concerns around the tide and reaching the boulder. Several different types of removal were considered including helicopters, explosives, barges even a tugboat but none of these options were guaranteed to efficiently or safely move something that size.

It became evident that the best way to remove the rock would be to break it into smaller pieces. Todd Clarke at Randwick City Council discovered a new rock breaking technique using powder poured into pre-drilled holes in the rock which will expand when mixed with water. The extreme pressure (18,000 pounds per square inch) will crack the rock into smaller pieces for easier removal.

Randwick City Council awarded the job to one of our customers who was quick to realise the quickest way to complete the job was to crane machines off the cliff during low tide, this was the only way to access the pools. Unsure what sized machines would be right for the job Sydney sales representative; Nick Brookbanks looked over the specifications for the crane and discovered that a 5.5T Excavator was the biggest Excavator which could be used.

A 180-tonne crane was fixed at the top of Dunningham Reserve at Coogee to winch down our two 5.5T excavators and hammers each day to break the rock and then remove it from the Baths. Then as the tide came in the crane removed them back up to Dunningham Reserve.

In order to do the job conditions had to be perfect; if the wind was too strong the job couldn’t be completed. Luckily conditions held-up and the job was able to be completed in 3 days, much less time than the week that had been projected for this job.

In the end our customer and Randwick City Council were very happy with the outcome!