Home > Blog > Case Studies > What the Construction Boom Means to Australians and Home Ownership
May 25, 2017 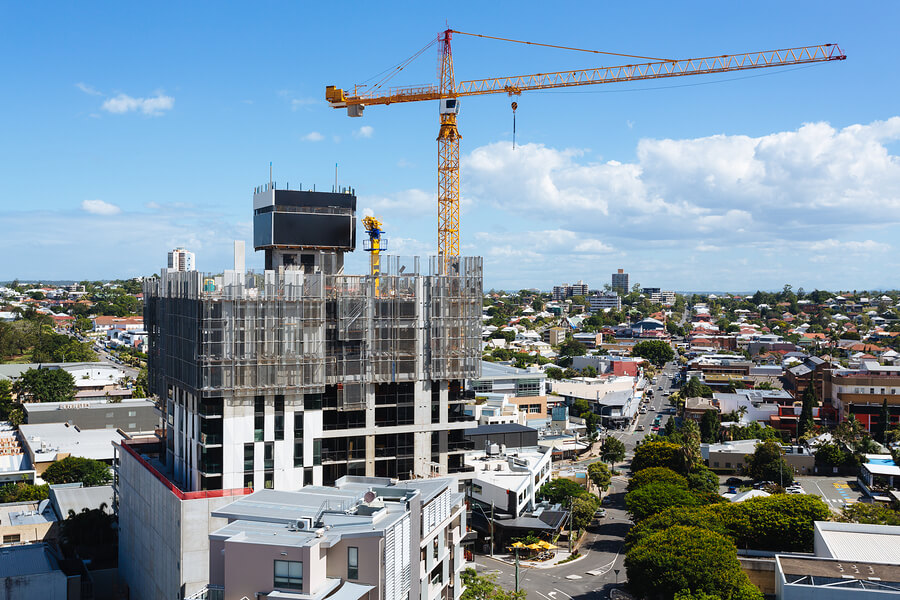 With silhouettes of cranes and new apartment buildings on the horizons of most major cities, it appears Australia is enjoying one incredible boom in construction. It really got started back in 2014, as the mining industry, which had sustained Australia’s economy through the global economic crisis, started to wane.

Back then, CommSec chief economist, Craig James, said in an interview, ““We’re already starting to see that (a housing boom) with things like home lending. If more loans are being taken out for the construction of houses and apartments you tend to expect that is going to translate into more building work happening. It’s the same in terms of council approvals to build new dwellings — they’re at record highs.”

Then, in 2015, home construction, at a growth rate of 7.7%, helped the industry hit a peak, according to the Housing Industry Association (HIA). This news was, of course, great for the periphery companies around construction, too. The renting of excavators for new projects, through to the cranes in the sky, all meant a healthy, vibrant industry across Australia, in which new complexes have been invested in and built across all the capital cities.

The construction industry has been further driven by incredibly low interest rates, making for a highly competitive housing market – for both new homes and old – but one in which demand has greatly outstripped supply, and there has been no end of demand on the lower end of construction for new projects, either.

Whether it has been the construction of the house itself, or people hiring compact excavators to build pools or help with the landscaping of their property, there has been heavy demand for small-scale equipment as Aussie families realise their great Australian dreams.

For now, there have been areas where the construction boom would seem to have settled; Western Australia, for example, is feeling a greater decline in the resources sector, which is pushing downwards demand for construction too.

And yet, with projects coming on that were greenlit through the construction boom, it would seem that in the short term, at least, there will be another uplift in demand soon.

As an article in The WA News from April 2017 states, “An analysis by The West Australian reveals the projects will deliver about 30,000 new construction jobs, primarily on commercial property developments due to start or ramp up over the next 12 to 18 months. The jobs will be on projects including four major shopping centre redevelopments, the Forrestfield Airport link and several apartment towers.”

Meanwhile, in those cities where there is a significant demand for high-rise apartments and high-density living (Sydney, Melbourne and Brisbane in particular) the real boom is in demand for those, rather than standalone homes. CoreLogic data, as cited by Business Insider Australia, shows that for the first time the number of dwellings being constructed is weighted significantly in favour of units. 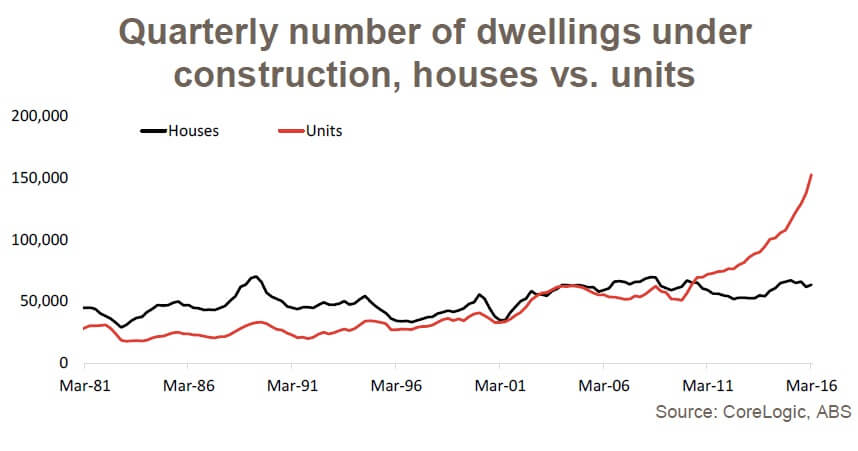 And this trend shows absolutely no indication of easing any time soon, with the number of dwellings approved but not yet commenced also weighted heavily in favour of units: 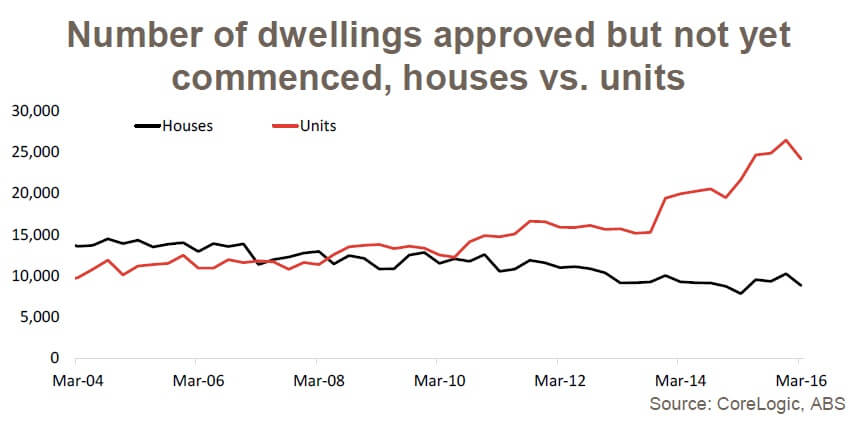 What does all this mean for Australia? The immediate concern is that the housing boom, having peaked, is now starting to oversaturate, which will end up hurting the market. As Cameron Kusher, a research analyst at CoreLogic, said in an interview with Business Insider:

“There are though concerns of ‘over-building’ in some areas, especially considering in certain locations much of the new unit supply is targeted at investors rather than the owner occupier market.”

“Given the challenges in securing enough pre-sales to trigger the commencement of some projects, over the coming quarters, we’re expecting that some projects will not begin construction.”

Despite these concerns, it would seem that the housing, construction and earthmoving industries will find a second wind soon. Both major political parties had signaled an intent to help address the increasing difficulty that first home buyers are finding in getting their first home. The politicians are divided on how to do that, but regardless of what form it takes, if the politicians are able to get additional blood into the market, then that should generate additional interest, and potentially more construction work.

And interest rates remain low, and look like they’ll do so into the medium term. This will also help encourage people into investing in construction projects, while the capital needed to complete construction initiatives is relatively minimal. In other words, if you’ve ever wanted to build your own home, the next couple of months might just provide you with the best opportunity that you’re going to get.